Asynchronous tasks are necessary when applications are frozen due to actions that do not stop and let the user continue using them, you have probably seen the message "Application not responding ...". Let's see how to solve this problem with a new feature of Framework 4.5.

A computer has a fixed number of processors and each of these processors can perform only one operation at a time, let's call this operation thread. Each thread in an application is programmed to run on the processor for a period of time.

If a code performs some I / O action, the thread is suspended until the device has completed its work. If you have a very slow task it can start working on a separate thread and get the result of the operation once the task is completed. While the separate thread running the application can perform other tasks unrelated to the task of long duration. Thus, we can isolate the work they do homework.

Here is how to call another task using a wire with framework 2.0

For more information about threads go to::
http://msdn.microsoft.com/en-us/library/6kac2kdh.aspx
Changes to data are also time-consuming resulting in a poor user experience. Another way to use alternate tasks using threads is to use a BackgroundWorker object as shown below.

It starts to look very complicated and we always need a method or block of code that responds to events "DoWork" and "CompletedWork".

When invoking a task and its completion is expected, use the keyword "await" when you call a method. Use the syntax:

In this way the code flow does not stop. No need to assign methods to events, even more, there is no callbacks because now the compiler is responsible for creating them.

In an asynchronous function with void return type or Task, return statements should not be an expression.

When the return type is Task <T> return statements should have an expression that is implicitly convertible to T.

Conventionally asynchronous methods use the Async suffix to indicate that execution can be carried out after the method has ended.

An async method provides a convenient way to do things that take a long time without causing blockages in the calling thread. The thread that makes an async method call can continue without having to wait until the method finishes.

An expression await is only allowed when it is within an asynchronous method. Commonly, a modified method for the modifier async contains at least one instruction await. Such a method runs synchronously until it meets the first expression await, at which execution is suspended until the task ends.


Requirements to use Async

Async is available in the Beta version of Visual Studio 11 or as a download CTP (Community Technology Preview) for Visual Studio 2010 SP1.

As a small example to understand how you can use async and await generate a small program that allows us to see the effect of TAP pattern.

Task 1 - Create an application synchronously.
1.     Start Visual Studio 11 and created a new WPF application in C # called SampleAsync.
2.      Change the properties of the main window to have a size of 480 by 480 pixels.
3.      Add two buttons and a ListBox. Name the controls. ButtonRead, ButtonMessage and FileList, respectively..
4.     Arrange the components so that they have the following appearance: 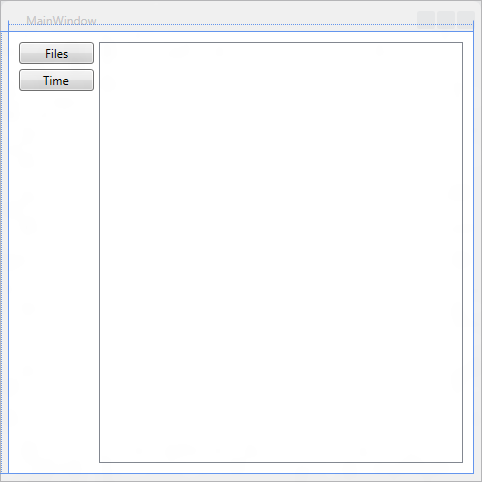 5.   Open the file in C # code associated with MainWindow and add the following code just below the constructor.

6.       Double-click on the button to generate a ButtonRead_Click event handler and add the following code.

7.     Return to design mode and double-click on ButtonMessage to generate the Click event handler. Next, add the following code to the generated method.

8.      Run the application and press the Files button. Note that the application freezes and you can not press the Time button. After 5 seconds the ListBox is populated with the files in the directory and theTime button is functional and displays the message. 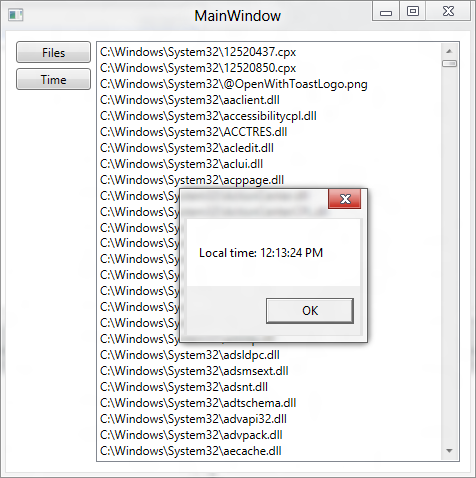 Task 1 - Modify the method GetFiles to be asynchronous.
1.      Go to the contents of this method and modify its structure so that the return data type changes from IEnumerable<String> to Task<IEnumerable<String>> and the name of the method now has the suffix "Async" as shown.

Task 2 - Modify the Click event handler to be able to make asynchronous calls..
1.      Change the structure of the method by adding the async modifier as shown.

3.     Run the application, press the button Files and check that the application is not frozen and is receptive. You can now press the Time button without having to wait the end of the period of 5 seconds. 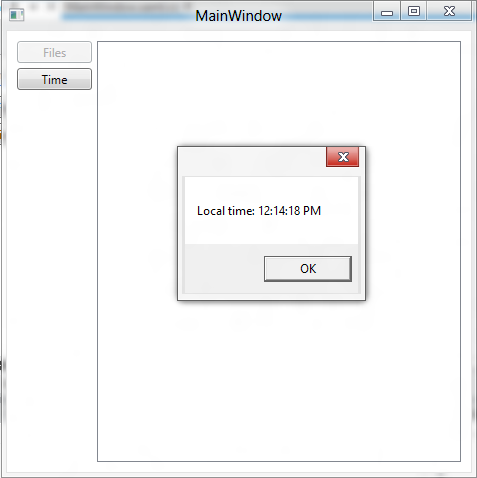 In this second example we have created an application that does not freeze its operation for initiating a call to a method.

Hi, after reading this remarkable piece of writing i am as well happy to share my experience here with mates.
Also see my web site > How to stop your bike being stolen